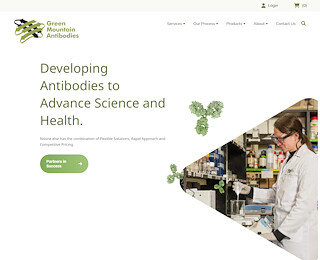 Antibodies are the Y-shaped proteins that the immune system produces in response to the entry of foreign molecules, called pathogens, into the body. The part of the pathogens that the antibodies bind to are referred to as antigens. The immune system's ability to recognize the antigens allows antibody developers to manipulate this system to selectively produce antibodies that can bind to antigens of interest.

What is Antibody Development?

In simple terms, antibody development is the entire process involved in generating and characterizing an antibody. The traditional process starts with injecting an antigen into a laboratory animal and allowing its immune system to develop a large number of antibodies. Then the animal is bled, and the antibodies are purified from the serum.

Development vs. Production of Antibodies – What is the Difference?

Antibody development has expanded from just collecting the blood fraction with a wide range of antibodies from immunized animals to being able to isolate the cells that generate antibodies and immortalize them for the continuous production of identical antibodies. And now the genetic information that codes for antibodies can be sequenced and used to make antibodies that are clones of one another.

On the other hand, antibody production refers to the process of creating a system where large amounts of the antibodies developed previously can be created. The procedure also changes depending on the antibody types:

Polyclonal antibody production can only be limited by the amount of serum available because they are collected directly from the serum via a purification column. If you need a large number of polyclonal antibodies, it is advisable to use a large animal such as sheep, goat, or llama.

The Production of monoclonal antibodies can be performed in vivo or in vitro using hybridoma cells, while the production of single-chain variable region antibodies requires transfecting cells usually with a lentivirus. This type of antibody is often referred to as a recombinant antibody.

How long does antibody development take?

Antibody development is a process that can take several weeks to months, depending on the host species used, the type of antibody being developed, and how immunogenic the antigen is.

Antibodies can also be made in silico using a computer program to generate the VDJ region against an antigen. This computer-generated sequence is then translated into actual genetic information using DNA printers. The genetic information is then turned into an antibody by harnessing the recombinant system.

How long does it take to produce and purify antibodies?

Antibody production and purification take approximately 4 – 6 weeks, starting with frozen cells. The duration of production depends on the growth characteristics of the cell lines and the number of cell lines selected for production.

Purification is less time consuming and depends on the amount being purified and the method. One popular method is to take the sera containing antibodies (antisera) and pour them through a column with protein G beads packed inside.

The other method is using high precision liquid chromatography or size exclusion chromatography. Running the antisera over a long expanse of chromatography tubing allows for the separation of the desired population of antibodies by size.

What are the major functions of antibodies?

Antibodies' biological functions are to bind to toxins and pathogens for the detection and elimination by the immune system. Nature has created an elegant manner to defend and adapt while scientists have figured out ways to manipulate it:

Do you have more questions you would like answered? Contact Green Mountain Antibodies for a full range of services for creating new monoclonal antibodies or producing antibodies: 802-865-6230

GMAb offers an extensive line of purified monoclonal antibodies with a particular focus on blood coagulation and fibrinolysis.  Our products are available for immediate purchase and can be customized to your specific needs, including biotin and fluorescent conjugations.